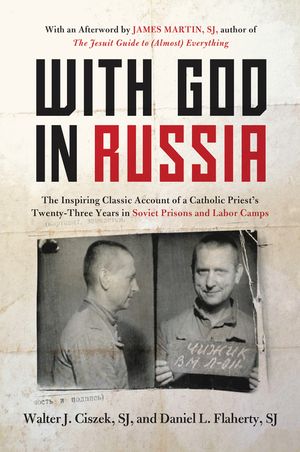 With God in Russia

Republished for a new century and featuring an afterword by Father James Martin, SJ, the classic memoir of an American-born Jesuit priest imprisoned for fifteen years in a Soviet gulag during the height of the Cold War—a poignant and spiritually uplifting story of extraordinary faith and fortitude as indelible as Unbroken. Foreword by Daniel L. Flaherty.

While ministering in Eastern Europe during World War II, Polish-American priest Walter Ciszek, S.J., was arrested by the NKVD, the Russian secret police, shortly after the war ended. Accused of being an American spy and charged with "agitation with intent to subvert," he was held in Moscow’s notorious Lubyanka prison for five years. The Catholic priest was then sentenced without trial to ten more years of hard labor and transported to Siberia, where he would become a prisoner within the forced labor camp system made famous in Alexsandr Solzhenitsyn’s Nobel Prize—winning book The Gulag Archipelago.

In With God in Russia, Ciszek reflects on his daily life as a prisoner, the labor he endured while working in the mines and on construction gangs, his unwavering faith in God, and his firm devotion to his vows and vocation. Enduring brutal conditions, Ciszek risked his life to offer spiritual guidance to fellow prisoners who could easily have exposed him for their own gains. He chronicles these experiences with grace, humility, and candor, from his secret work leading mass and hearing confessions within the prison grounds, to his participation in a major gulag uprising, to his own "resurrection"—his eventual release in a prisoner exchange in October 1963 which astonished all who had feared he was dead.

Powerful and inspirational, With God in Russia captures the heroic patience, endurance, and religious conviction of a man whose life embodied the Christian ideals that sustained him.

“This is really the story of a non-spy who stayed out in the cold. It builds in interest and suspense from page to page.” — Denver Rocky Mountain News

“. . . a human and historical document of compelling interest.” — The Atlantic

“. . . the great story of spirit and courage, written by the Catholic priest who literally disappeared after being taken prisoner in Russia.” — Catholic Sentinel

“His integrity and his religious faith light up his sturdy account of what he endured and his report on what he saw, an American prisoner’s view of the Soviet Union.” — New York Post

“. . . at once an unusually penetrating picture of Siberian life and also an ennobling insight into a simple and unpretentious man who would never admit to being one of God’s heroes.” — The Sign

“. . . holds the reader in a grip of suspense that the late Ian Fleming would have envied.” — Pittsburgh Press

“More than a superbly interesting adventure story, With God in Russia is a moving document of a man’s faith in his God and his God’s goodness in allowing him to live through his ordeal.” — The Advocate

“. . . an incisive portrayal of the struggle for existence in a Russian prison camp. The very simplicity of presentation makes it unforgettable.” — Louisville Times

“A truly inspiring story, to our age what Dostoevsky’s ‘House of the Dead’ was to his.” — Ave Maria