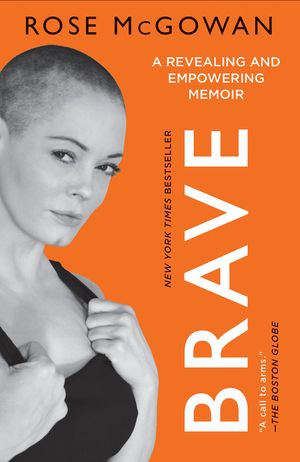 "BRAVE works beautifully as a manifesto. It’s a call to arms—not just against the specific men who mistreated McGowan and the men and women who enabled that mistreatment, but against an industry."—The Boston Globe

BRAVE is her raw, honest, and poignant memoir/manifesto—a no-holds-barred, pull-no-punches account of the rise of a millennial icon, fearless activist, and unstoppable force for change who is determined to expose the truth about the entertainment industry, dismantle the concept of fame, shine a light on a multibillion-dollar business built on systemic misogyny, and empower people everywhere to wake up and be BRAVE.

"My life, as you will read, has taken me from one cult to another. BRAVE is the story of how I fought my way out of these cults and reclaimed my life. I want to help you do the same." -Rose McGowan

“Frank and bold, this memoir is a resounding wakeup call to the entertainment industry and to society as a whole.” — Publishers Weekly (starred review)