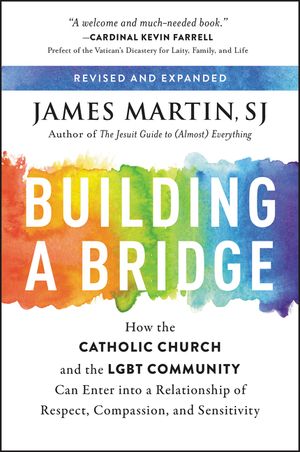 The New York Times bestselling author of The Jesuit Guide to (Almost) Everything turns his attention to the relationship between LBTGQ Catholics and the Church in this loving, inclusive, and revolutionary book.

On the day after the Orlando nightclub shooting, James Martin S.J. appeared in a video on Facebook in which he called for solidarity with our LGBTQ brothers and sisters. "The largest mass shooting in US history took place at a gay club and the LGBTQ community has been profoundly affected" he began. He then implored his fellow Catholics-and people everywhere-to "stand not only with the people of Orlando but also with their LGBTQ brothers and sisters. . . . Sadly of all the US Catholic bishops who expressed their condolences after the shooting, only one that I know . . . made any explicit reference to the LGBT community." A powerful call for tolerance, acceptance, and support—and a reminder of Jesus' message for us to love one another—Father Martin's post went viral and was viewed more than 1,6 million times.

Now, Martin expands on his reflections in this moving and inspiring book, offering a powerful, loving, and much-needed voice in a time marked by anger, prejudice, and divisiveness. Adapted from a talk he gave to New Ways Ministry, a group that ministers to and advocates for LGBT Catholics, Building a Bridge provides a roadmap for repairing and strengthening the bonds that unite all of us as God's children. Martin uses the image of a two-way bridge for LGBTQ Catholics and the Church to come together in a call to end the "us" versus "them" mentality. Turning to the Catechism, he draws on the three criteria at the heart of the Christian ministry—respect, compassion, and sensitivity—as a model for how the Catholic Church should relate to the LGBT community.

“A welcome and much-needed book that will help bishops, priests, pastoral associates, and all church leaders, more compassionately minister to the LGBT community. It will also help LGBT Catholics feel more at home in what is, after all, their church.” - Cardinal Kevin Farrell, Prefect of the Vatican’s Dicastery for Laity, Family and Life

“Martin has written a wonderful book that challenges the institutional church to be in dialogue with the LGBT community. This has challenged a lot of people, because you don’t want to build a bridge if you already think you’re right. But this is where we have to go next.” - Wilton Gregory, Archbishop of Atlanta

“Martin knows that by drawing close and entering into relationships, we learn mercy, equality of heart, and love of enemies. If we can be Christian in those things, then the scandal at the heart of the relationship between LGBT believers and our churches is on the way to being undone.” - James Alison, author of Faith Beyond Resentment

“The Gospel demands that LGBT Catholics be genuinely loved and treasured in the life of the Church. They are not. Martin provides us the language, perspective, and sense of urgency to undertake the arduous but monumentally Christlike task of replacing a culture of alienation with a culture of merciful inclusion.” - Robert McElroy, Bishop of San Diego

“Sexuality, gender, and religion—a volatile mix! With this book, Father Martin shows how the Rosary and the rainbow flag can peacefully meet each other. After this must-read book, you’ll understand why New Ways Ministry honored Father Martin with its Bridge-Building Award.” - Sister Jeannine Gramick, SL, co-founder of New Ways Ministry

“In too many parts of our church, LGBT people have been made to feel unwelcome, excluded, and even shamed. Martin’s inspiring new book invites church leaders to minister with more compassion and reminds LGBT Catholics that they are as much a part of our church as any other Catholic.” - Cardinal Joseph Tobin, Archbishop of Newark

“Martin discusses how . . . clergy and LGBT laity must genuinely befriend and become known to one another, in the assurance that the Holy Spirit sustains the effort.” - Booklist

“If Martin’s book, with its biblical reflections on God’s loving creation of us and Jesus’ unconditional welcome, can help LGBT people and our families experience and trust God’s tenderness, he will have laid the foundation stone for social change and spiritual renewal.” - Washington Post

“In this much anticipated new book, Father James Martin, SJ, seeks to end the ‘us’ versus ‘them’ mentality that has long divided LGBT Catholics and the institutional Church.” - Crux

“The church may be on the cusp of another baby step in this ongoing discussion with the publication of this new book.” - Jonathan Merritt, Religion News Service

“Martin’s works have consistently sought to convey the riches of Catholic Christianity in both a style and a language that is as accessible as possible in a pluralist, post-Christian culture. And it is one of Martin’s great gifts that he does not sacrifice sophistication in aiming at accessibility.” - Commonweal

“It’s still rare to find anyone in the church hierarchy today—especially a Catholic priest—who will speak frankly and favorably about the queer Catholic experience. Father James Martin is that rare exception, making it his mission to affirm their right to belong in the church.” - Vice

“A brief, clear guide on how Catholics can heal some of the rifts surrounding issues of sexuality. . . . The surprising places he finds insight highlight the subtlety of his thought and the time he has devoted to considering these questions.” - Publishers Weekly

“A bold book, it talks clearly and openly about an issue that daunts and taunts our church, and, in its well-reasoned way, it takes the hysterics out of the discussion.” - America

“Once again Father Martin gets to the heart of the matter. Jesus prayed with deep passion that we might be one. This courageous work is necessary reading for all who wish to build up the Christian community and to give witness to the Gospel message of inclusion.” - John C. Wester, Archbishop of Santa Fe

“Many lesbian, gay, bisexual and transgender Catholics have spent years on the margins of our community inviting such dialogue. This book cracks open a new door to opportunities to ask important questions about the inclusion of LGBT Catholics in the church, and those opportunities should be seized.” - National Catholic Reporter

“Father Martin describes the ‘culture of encounter’ Pope Francis frequently espouses. With a heart sympathetic to the suffering that LGBT people of faith have experienced and a love for the Church, he shows how this encounter can be a fruitful and liberating journey for those on both sides.” - John Stowe, Bishop of Lexington, Kentucky

“James Martin had to know, even before he typed a single word of Building a Bridge, that no matter what he wrote, he was walking into a minefield of criticism. Which makes his courage — and his compassion — all the more powerful.” - Chicago Tribune

“Earned him the gratitude of parents of gay children or adults who feel unwelcome at church because of their sexual orientation.” - New York Times

“Urges a much-needed calm conversation among all Catholics and the LGBT community based on the gospel teaching of love and respect.  This book helps the whole Church engage the mandate of Jesus to minister to all.  I recommend it for parish, schools, and family discussions.” - Joseph A. Fiorenza, Archbishop Emeritus of Galveston-Houston

“I affirm what Martin is doing...he has given his life for the service of the church. The Holy Father appointed him to a commission in Rome. I say to people: Make up your own decision, your own mind about him, by reading exactly what he wrote.” - Cardinal Blase Cupich, Archbishop of Chicago

“Building a Bridge has re-energized the debate about the LGBTQ faithful…. [Martin] provides a roadmap for repairing and strengthening the bonds that unite all of God’s children.” - Human Rights Council

“Martin’s gentle, gracious, and attractive book neither breaches nor defends any magisterial norms of Catholic social ethics. In fact, this is a book not about sexual ethics, but about ecclesiology and pastoral theology. The church is a pilgrim church, and its embrace should be inclusive.” - Lisa Sowle Cahill, Theological Studies

“No stranger to breaking the mold himself, James Martin’s call for Catholics to be more accepting and more compassionate toward the LGBTQ community has been met with both cheers and jeers and he lays it all out in his book, Building a Bridge.” - Amanpour on PBS

“Father James Martin is among the most vocal advocates in church leadership for compassionate dialogue between LGBT Catholics and the church. He published Building a Bridge to spark conversation between the two sides.” - US Catholic

“Father Martin wants to build bridges between the Catholic Church and the LGBT community. He is doing so from a biblical and faithful line of approach. His book is a valuable instrument both for pastors who are engaged with the LGBT community and their family and friends.” -  Bishop Johan Bonny of Antwerp