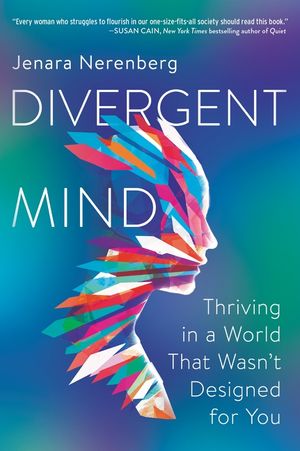 Thriving in a World That Wasn't Designed for You

A paradigm-shifting study of neurodivergent women—those with ADHD, autism, synesthesia, high sensitivity, and sensory processing disorder—exploring why these traits are overlooked in women and how society benefits from allowing their unique strengths to flourish.

As a successful Harvard and Berkeley-educated writer, entrepreneur, and devoted mother, Jenara Nerenberg was shocked to discover that her “symptoms”--only ever labeled as anxiety-- were considered autistic and ADHD. Being a journalist, she dove into the research and uncovered neurodiversity—a framework that moves away from pathologizing “abnormal” versus “normal” brains and instead recognizes the vast diversity of our mental makeups.

When it comes to women, sensory processing differences are often overlooked, masked, or mistaken for something else entirely. Between a flawed system that focuses on diagnosing younger, male populations, and the fact that girls are conditioned from a young age to blend in and conform to gender expectations, women often don’t learn about their neurological differences until they are adults, if at all. As a result, potentially millions live with undiagnosed or misdiagnosed neurodivergences, and the misidentification leads to depression, anxiety, low self-esteem, and shame. Meanwhile, we all miss out on the gifts their neurodivergent minds have to offer.

Divergent Mind is a long-overdue, much-needed answer for women who have a deep sense that they are “different.” Sharing real stories from women with high sensitivity, ADHD, autism, misophonia, dyslexia, SPD and more, Nerenberg explores how these brain variances present differently in women and dispels widely-held misconceptions (for example, it’s not that autistic people lack sensitivity and empathy, they have an overwhelming excess of it).

Nerenberg also offers us a path forward, describing practical changes in how we communicate, how we design our surroundings, and how we can better support divergent minds. When we allow our wide variety of brain makeups to flourish, we create a better tomorrow for us all.

“Divergent Mind explores powerful and positive ways to understand our fundamental differences. Its focus on women is much needed and timely. The book de-pathologizes those of us who most profoundly and intensely think and feel the world around us. I found it to be eye-opening and healing.” - Mary Pipher, New York Times bestselling author of Women Rowing North and Reviving Ophelia

"American psychiatry has increasingly taught our society to think that people can be divided into two categories: those who are 'normal' and those who are 'not normal.' In Divergent Mind, Jenara Nerenberg powerfully writes of an urgent need to scrap that way of thinking, and replace it with a societal appreciation for the many gifts that people with divergent minds bring to our world. Hers is a clarion call for change." - Robert Whitaker, New York Times bestselling author of Anatomy of an Epidemic and Mad in America

“This book is powerful, much-needed for our times, and Jenara Nerenberg offers a unique blend of personal, scientific, and societal analysis. Divergent Mind is really for all women, giving them the chance to understand each others’ invisible differences and gifts.” - Elaine Aron, PhD, bestselling author of The Highly Sensitive Person

“What is ‘normal’? Who gets to decide? Jenara Nerenberg’s wide-ranging Divergent Mind asks and answers these and other essential questions, offering a vision for how individuals and society can take better advantage of the many ways in which we are human.”  - Louise Aronson, MD, New York Times bestselling author of Elderhood: Redefining Aging, Transforming Medicine, Reimagining Life

“This wonderfully positive and accessible introduction to the neurodiversity paradigm is packed with life-changing insight for anyone whose way of experiencing the world diverges from the ordinary.”  - Nick Walker, PhD, autistic neurodiversity scholar and aikido teacher

“Empowering…. This important book not only advocates for research and innovation; it demonstrates the power of acceptance, kindness, and the celebration of differences.”  - Booklist

“An extraordinary, jaw-dropping take on a topic with which many women will identify.” - Library Journal STARRED review