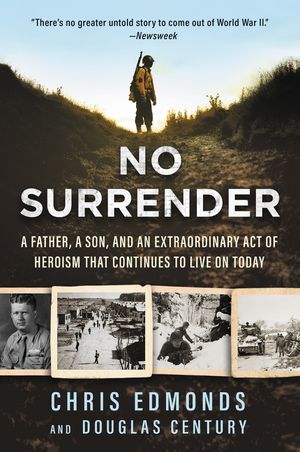 A Father, a Son, and an Extraordinary Act of Heroism That Continues to Live on Today

In the tradition of #1 New York Times bestsellers like Unbroken, Boys on the Boat, and Band of Brothers, No Surrender is an unforgettable story of a father’s extraordinary acts of valor in World War II and a son’s thrilling journey to discover them?an epic narrative of bravery, compassion, and faith.

Like most members of the Greatest Generation, Roddie Edmonds, a humble American soldier from East Tennessee, rarely spoke about his experiences during World War II. Not even his son Chris knew the full details of Roddie’s capture at the Battle of the Bulge or his captivity at Stalag IXA, a Nazi POW camp. But when Chris’s daughter was assigned a family history project, Chris reread Roddie’s wartime diaries, which set in motion a series of life-changing events.

Called to learn his father’s story with a renewed sense of passion and purpose, Chris embarked on a years-long journey, interviewing surviving POWs under Roddie’s command, and retracing his father’s footsteps, from Fort Jackson, South Carolina, where a boyish Roddie transformed into a seasoned leader of men, to the patch of grass near Ziegenhain, Germany, where he stared evil in the eye and dared a Nazi to shoot.

Along with New York Times bestselling author Douglas Century, Chris Edmonds takes us to the front lines of this inspiring multigenerational story, revealing in gripping, novelistic detail Roddie’s previously untold heroism—and the lasting effects his bravery had on the lives of thousands, then and now. “What’s most remarkable about my journey to discover what my father did in the Second World War,” Chris writes, was “the realization that any one of us has the untapped potential to do something incredibly courageous. . . . We all have the potential to change the world simply by standing up for what’s right.”

A shining example of the transformative and redemptive power of moral courage, No Surrender is a celebration of faith, family, and service—the very characteristics that define us today.

“There’s perhaps no greater untold story to come out of World War II. It’s a heck of a father-son story, but it’s also a tale of the power of one man to do something selfless that forever changes a life.” - Newsweek

“After his father’s death, Chris Edmonds journeyed across the US and to Germany to discover his father’s heroic past. No Surrender is a quintessential American story of bravery, compassion, and righteousness told by an admiring son.” - James Bradley, New York Times bestselling author of Flags of Our Fathers

“Roddie Edmonds is a hero for our age—or any age. His story of principled defiance in the face of evil is an inspiration and a challenge. In No Surrender, Chris Edmonds and Douglas Century have given us the one righteous man whose goodness spares us all.” - Mitchell Zuckoff, New York Times bestselling author of Fall and Rise: The Story of 9/11

“A fascinating war story... a you-are-there portrait of the horrors of war and the incredible effect one selfless person can have on hundreds.”
- Kirkus Reviews

“In this page-turning memoir, Edmonds and Century chronicle the WWII experiences of Edmond’s late father, Army Master Sgt. Roddie Edmonds…[and] have skillfully transformed war records, interviews, and archival data into a dramatic account…More than a story of brothers in arms, this work is a son’s labor of love.” - Publishers Weekly (Starred Review)