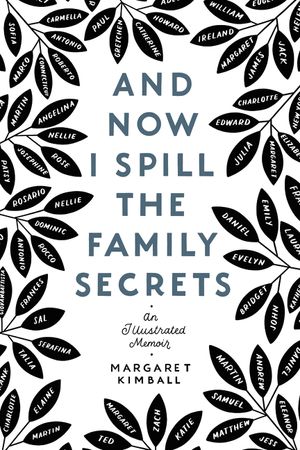 And Now I Spill the Family Secrets

In the spirit of Alison Bechdel’s Fun Home and Roz Chast’s Can’t We Talk About Something More Pleasant?, Margaret Kimball’s AND NOW I SPILL THE FAMILY SECRETS begins in the aftermath of a tragedy.

In 1988, when Kimball is only four years old, her mother attempts suicide on Mother’s Day—and this becomes one of many things Kimball’s family never speaks about. As she searches for answers nearly thirty years later, Kimball embarks on a thrilling visual journey into the secrets her family has kept for decades.

Using old diary entries, hospital records, home videos, and other archives, Margaret pieces together a narrative map of her childhood—her mother’s bipolar disorder, her grandmother’s institutionalization, and her brother’s increasing struggles—in an attempt to understand what no one likes to talk about: the fractures in her family.

Both a coming-of-age story about family dysfunction and a reflection on mental health, AND NOW I SPILL THE FAMILY SECRETS is funny, poignant, and deeply inspiring in its portrayal of what drives a family apart and what keeps them together.

"A compelling family saga about falling apart and coming back together again, Kimball’s book is part mystery, part confessional, and part love story. Her visuals capture the absences left behind when mental health crises change our relationships to those we love, but her words aim always to reconnect and understand. A probing, insightful, and ultimately beautiful work." - Brian Castleberry, Director of the Hayes Writers Series and author of Nine Shiny Objects

"Margaret Kimball's heart-wrenching memoir is proof that family secrets--once uncovered and embraced--can not only become art that wows us but art that moves us closer to empathy and understanding." - Rachel Beanland, author of Florence Adler Swims Forever

"Compelling and beautifully drawn…Margi Kimball sets out to unravel the complicated tangle of her family history with an architect’s meticulousness, detective’s curiosity, a writer’s eloquence, and a daughter and sister’s deep yet guarded love." - Ellen Forney, New York Times bestselling author of Marbles: Mania, Depression, Michelangelo and Me

"With scalpel-sharp writing and tidy drawings, Kimball takes on a detective-like rigor as she unthreads her mother’s bipolar disorder and suicide attempts, her parents’ divorce, and the family history leading up to these defining events….A riveting reality to inhabit." - Publishers Weekly (Starred Review)

"An extraordinarily honest look at life behind closed suburban doors, and with a sublimely redemptive conclusion. A welcome debut that will leave readers eager for a successor—and soon." - Kirkus (STARRED REVIEW)

“An astonishing, loving, resonant chronicle of the hard and necessary work to make sense of the consciousness in ourselves and in our families.” - Booklist (STARRED REVIEW)