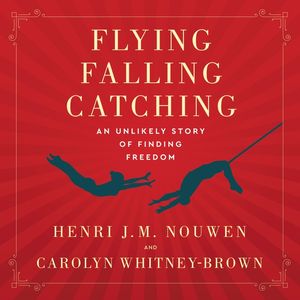 An Unlikely Story of Finding Freedom

In commemoration of the twenty-fifth anniversary of Henri J. M. Nouwen’s death comes this never-before published story of his surprising and inspiring relationship with a trapeze troupe, The Flying Rodleighs.

During the last five years of his life, spiritual leader and teacher Henri Nouwen became close to a travelling circus trapeze troupe, The Flying Rodleighs. Like Nouwen’s own life, a trapeze act is full of artistry, exhilarating successes, crushing failures and continual forgiveness. Nouwen wrote about his experience in a genre new to him: creative non-fiction. In Flying, Falling, Catching, his colleague and friend Carolyn Whitney-Brown presents his trapeze writings woven into a dramatic narrative that imagines Henri’s life flashing before him during his first heart attack.

Readers will meet Nouwen as a spiritual risk taker who was transformed by diversity as he learned to see the world through many perspectives, including his participation in the Civil Rights movement, his life in community with people with intellectual disabilities, his personal growth through friendships during the 1990s AIDS pandemic, and other unexpected encounters.

What will we do with our lives, and with whom will we do it? Through this story of flying and catching, Nouwen invites us all to let go and fly – and not be afraid to fall.