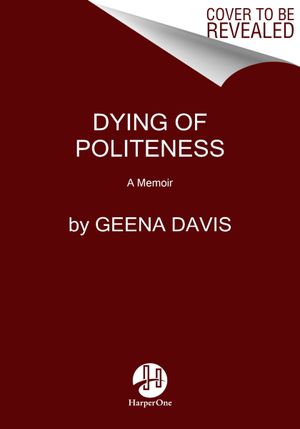 From two-time Academy Award winner and screen icon Geena Davis, the surprising tale of her “journey to badassery”—from her epically polite childhood to roles that loaned her the strength to become a powerhouse in Hollywood.

At three years old, Geena Davis announced she was going to be in movies. Now, with a slew of iconic roles and awards under her belt, she has surpassed her childhood dream—but the path to finding yourself never did run smoothly. In this simultaneously hilarious and candid memoir, Davis regales us with tales of a career playing everything from an amnesiac assassin to the parent of a rodent, her eccentric childhood, her relationships, and helping lead the way to gender parity in Hollywood—all while learning to be a little more badass, one role at a time. Dying of Politeness is a touching account of one woman’s journey to fight for herself, and ultimately fighting for women all around the globe.

"With saucy self-deprecation, robust glee, and touch of goofiness, Davis recounts behind-the-scenes anecdotes from her award-winning film and TV career with a dishiness that only thinly veils the underlying message of empowerment and commitment that enabled her own journey to women’s advocacy for gender equality and opportunity off- and on screen ... Davis' memoir will be hot, given its dual draw of Hollywood tales and urgently needed gender-rights advocacy." — Booklist