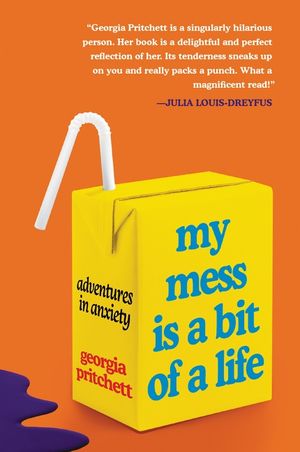 My Mess Is a Bit of a Life

“Georgia Pritchett is a singularly hilarious person. Her book is a delightful and perfect reflection of her. Its tenderness sneaks up on you and really packs a punch. What a magnificent read!”—Julia Louis Dreyfus

Jenny Lawson meets Nora Ephron in this joyful memoir-in-vignettes on living—and thriving—with anxiety from a multiple Emmy Award-winning comedy writer whose credits include Succession and Veep.

When Georgia Pritchett found herself lost for words—a bit of a predicament for a comedy writer—she turned to a therapist, who suggested she try writing down some of the things that worried her. But instead of a grocery list of concerns, Georgia wrote this book.

A natural born worrywart, Georgia’s life has been defined by her quirky anxiety. During childhood, she was agitated about the monsters under her bed (Were they comfy enough?). Going into labor, she fretted about making a fuss (“Sorry to interrupt, but the baby is coming out of my body,” I said politely). Winning a prestigious award, she agonized over receiving free gifts after the ceremony (It was an excruciating experience. Mortifying).

Soul-baring yet lighthearted, poignant yet written with a healthy dose of self-deprecation, My Mess Is a Bit of a Life is a tour through the carnival funhouse of Georgia’s life, from her anxiety-ridden early childhood where disaster loomed around every corner (When I was little I used to think that sheep were clouds that had fallen to earth. On cloudy days I used to worry that I would be squashed by a sheep), through the challenges of breaking into an industry dominated by male writers, to the exquisite terror (and incomparable joy) of raising children.

Delightfully offbeat, painfully honest, full of surprising wonders, and delivering plenty of hilarious, laugh-out-loud moments, My Mess Is a Bit of a Life reveals a talented, vulnerable, and strong woman in all her wisecracking weirdness, and makes us love it—and her—too.

“The delivery’s delightful and as finely tuned as poetry or a tight stand-up routine. Her torment, as well as her joys, are readers’ gain.” — Publishers Weekly (starred review)

"Mordantly understated at times, delightfully sharp-tongued at others." — Kirkus Reviews

"Georgia Pritchett is a singularly hilarious person. Her book is a delightful and perfect reflection of her. Its tenderness sneaks up on you and really packs a punch. What a magnificent read!''  — Julia Louis Dreyfus

“Reading Georgia Pritchett, you think a) I wish my brain moved that fast and b) under her fierce, take-no-prisoners wit beats the loudest heart. I cannot wait to read this again.” — Kathryn Hahn

“THIS IS REALLY GREAT.” — Samantha Irby

“So funny, so insightful, so moving. Just gorgeous.” — Jenny Colgan, author of The Bookshop on the Corner

"Pritchett is able to describe the ways she feels—as child and teen constantly worrying, as an adult, struggling to find relief from her feelings—in a manner that is both relatable and meaningful. Readers will find lots to like about this memoir, especially those who may have experience with the emotions Pritchett details." — Booklist

"Laugh-out loud funny at times, poignant and sincere at others, these musings on everything from childhood to motherhood are relatable, enjoyable and oh-so-welcome." — Zibby Owens, Good Morning America