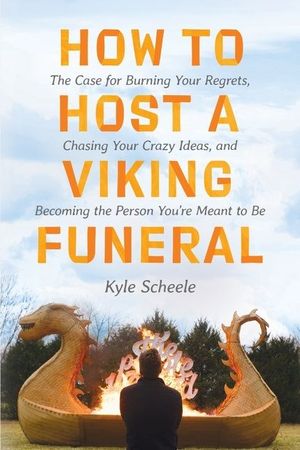 How to Host a Viking Funeral

The Case for Burning Your Regrets, Chasing Your Crazy Ideas, and Becoming the Person You're Meant to Be

An inspiring speaker and artist asked 20,000 people around the world to share the regrets they wanted him to burn in a mock Viking ship.

This is the story of what he learned about letting go of the pain of the past and embracing the future with hope.

Turning 30, artist and speaker Kyle Scheele wanted to do something unusual to mark this milestone. Instead of a birthday bash, he decided to hold a funeral to memorialize the decade of his life that was ending. Building a 16-foot Viking ship out of cardboard, he invited friends to help him set it on fire—a symbolic farewell to his 20s and all the grief, regret, and mistakes that accompanied those years.

When video of his Viking funeral went viral, it encouraged many others to let go of past hurts as well. Moved by the response he received, Kyle planned a second funeral (this time with a 30-foot cardboard Viking ship) and asked people to share the things they carried—the bad choices, disappointments, heartaches, and negative thinking that they wanted to lay to rest. He received more than 20,000 responses from around the world—stories both heartbreaking and hilarious, painful and inspiring.

In this entertaining and wise book, Kyle reflects on what he discovered about freeing ourselves from the pain of the past, interweaving anecdotes from those who participated with the story of his own journey of renewal. “This story involves multiple Viking funerals, thousands of square feet of cardboard, and enough hot glue to supply your mother-in-law's craft night for the rest of time,” he writes. “But it also involves regret, self-doubt, insecurity, and ultimately, redemption. So buckle up. It's about to get bumpy.”

How to Host a Viking Funeral is the story of letting go of the people we used to be, but no longer want to be. It’s about renewal; where there was once regret there is now blank space—an opportunity for a fresh start.

“Wise, funny, and surprisingly poignant, this book teaches us the most important lesson there is: how to be a better human being.” — Bob Goff, New York Times bestselling author of Dream Big and Live in Grace

“A hilarious, wise, and inspiring roadmap for life. Kyle Scheele bravely bares his own vulnerabilities to show us that what we reject most in ourselves are often the very things that connect us all as humans.” — Qian Julie Wang, New York Times bestselling author of Beautiful Country

“With humor, heart, and a whole lot of cardboard, Kyle Scheele delivers a blast of creative inspiration. Here we have something truly special - a reminder that we each already have the materials needed to live a life packed with beauty and joy.”  — Brad Montague, New York Times bestselling author and illustrator of The Circles All Around Us

“Scheele has written a love letter to those of us who struggle through the painful and seemingly endless process of moving on. Scheele gave me permission to celebrate the journey, with its highs and lows, and start a new adventure with nothing left to carry but the hope of what lies ahead.”  — Hugh Weber, CEO of The Great Discontent

"This book reads like it was written by someone who is 100 years old because Kyle has packed so much life into such a short time frame. I can't wait to see what you do after you read this manifesto for the beauty of crazy ideas." — Jon Acuff, New York Times bestselling author of Soundtracks: the Surprising Solution to Overthinking

“'No regrets’ is a cliché for a reason: we hate facing our shortcomings! I didn’t think it was possible, but Kyle Scheele makes this important inner work not just easy, but hilarious! The sugary goodness of his storytelling makes this medicine an actual treat.” — Andy J. Pizza, host of Creative Pep Talk podcast

“Like John Baldessari, who decided to cremate all his ‘bad art’ and start over, cardboard master and motivational speaker Kyle Scheele shows readers that they really can “burn it all down.” Get this book so you can learn to set your old life on fire before it burns you out.” — Austin Kleon, New York Times bestselling author of Steal Like an Artist