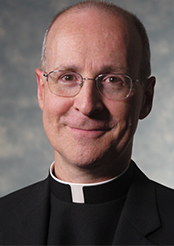 REV. JAMES MARTIN, SJ, is a Jesuit priest, editor at large of America magazine, and bestselling author of Jesus: A Pilgrimage, The Jesuit Guide to (Almost) Everything, andBetween Heaven and Mirth. Father Martin has written for many publications, including theNew York Times and The Wall Street Journal, and he is a regular commentator in the national and international media. He has appeared on all the major radio and television networks, as well as in venues ranging from NPR’s Fresh Air, FOX’s The O’Reilly Factor, and PBS’s NewsHour to Comedy Central’s The Colbert Report. Before entering the Jesuits in 1988, Father Martin graduated from the Wharton School of Business and worked for General Electric for six years. In 2017, Pope Francis appointed him to be a Consultor for the Vatican's Secretariat for Communication.

"A masterful teacher and storyteller."

"A terrific storyteller . . . wise and entertaining."

"Martin is one of our most popular spiritual writers—
and for good reason."