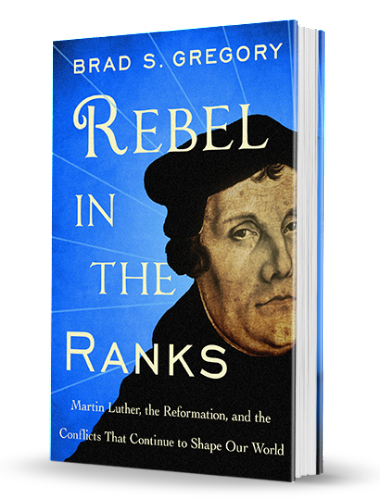 Click to start reading the introduction and first chapter

For five centuries, Martin Luther has been lionized as an outspoken and fearless icon of change who ended the Middle Ages and heralded the beginning of the modern world. In Rebel in the Ranks, Brad Gregory, renowned professor of European history at Notre Dame, reveals that Luther did not, in fact, intend to start a revolution that would divide the Catholic Church and forever change Western civilization.

Gregory analyzes Luther’s inadvertent role in starting the Protestant Reformation and the epochal changes that followed. He shows how Luther’s insistence on the Bible as the sole authority for Christian truth led to conflicting interpretations of its meaning—and to the rise of competing churches, political conflicts, and social upheavals. Ultimately, he contends, some of the major historical and cultural developments that arose in its wake—including the Enlightenment, individual self-determination and moral relativism, and a religious freedom that protects one’s right to worship or even to reject religion—would have appalled Luther.

Published on the 500th anniversary of the Protestant Reformation, this compelling, illuminating, and expansive religious history examines the complicated and unintended legacies of Martin Luther and the epochal movement that continues to shape the world today.

Get the free reading guide for Rebel in the Ranks