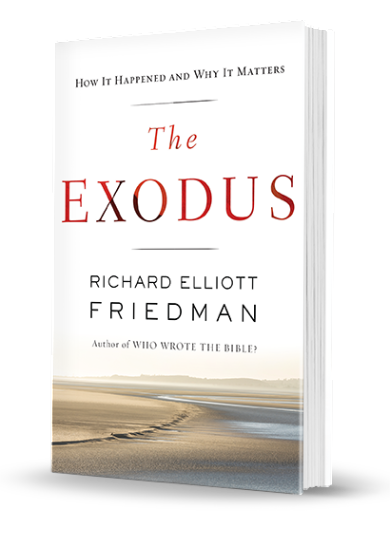 Click to start reading the introduction and first chapter

Discover the real history of the Exodus and why it matters.

Like a detective on an intricate case no one has yet solved, pioneering Bible scholar and bestselling author of Who Wrote the Bible? Richard Elliott Friedman cuts through the noise — the serious studies and the wild theories — merging new findings with new insight. From a spectrum of disciplines, state-of-the-art archeological breakthroughs, and fresh discoveries within scripture, he brings real evidence of a historical basis for the exodus — the history behind the story. The biblical account of millions fleeing Egypt may be an exaggeration, but the exodus itself is not a myth.

Friedman does not stop there. Known for his ability to make Bible scholarship accessible to readers, Friedman reveals how much is at stake when we explore the historicity of the exodus. We learn that it became the starting-point of the formation of monotheism, the defining concept of Judaism, Christianity, and Islam. Moreover, we learn that it precipitated the foundational ethic of loving one’s neighbors — including strangers — as oneself. He concludes, the actual exodus was the cradle of global values of compassion and equal rights today.

Get the free reading guide for The Exodus

PRAISE FOR THE EXODUS:

“The Exodus displays, yet again, the unique gifts of Richard Elliott Friedman, whose work always embodies the mastery of an accomplished and distinguished biblical scholar, the acute eye of a literary detective who is capable of teasing out the deepest mysteries from an ancient text, and – above all – the irresistible skill of a born storyteller. That is why The Exodus is one work of scholarship that is best described as a page-turner.”
— Jonathan Kirsch, author of The Harlot by the Side of the Road

“A treasure! The Exodus is not only an argument for the reality behind the Exodus story, but is itself a revelation. History matters; human dignity matters, and the Exodus story launches the world’s deepest and most profound assertion of liberty ever known. Let Richard Friedman guide you from slavery to freedom and teach a transformative biblical lesson along the way.”
— Rabbi Dr Bradley Shavit Artson, American Jewish University

“A vivid integration of millennia of history, stories, myth, and interpretations, as well as centuries of scholarship, masterfully woven together, and intertwined with brilliant insights and observations. This thought-provoking book will become a must-read for anyone interested in the biblical story of the Exodus, scholars and interested laypersons alike.”
— Avraham Faust, The Martin (Szusz) Department of Land of Israel Studies

Richard Elliott Friedman is one of the premier bible scholars in the country. He earned his doctorate at Harvard and was a visiting fellow at Oxford and Cambridge, a Senior Fellow of the American Schools of Oriental Research in Jerusalem, and a Visiting Professor at the University of Haifa. He is the Ann & Jay Davis Professor of Jewish Studies at the University of Georgia and the Katzin Professor of Jewish Civilization Emeritus of the University of California, San Diego. He is the author of Commentary on the Torah, The Disappearance of God, The Hidden Book in the Bible, The Bible with Sources Revealed, The Bible Now, The Exile and Biblical Narrative, and the bestselling Who Wrote the Bible? He was an American Council of Learned Societies Fellow and was elected to membership in The Biblical Colloquium. His books have been translated into Hebrew, German, Italian, Spanish, Russian, Japanese, Polish, Hungarian, Dutch, Portuguese, Czech, Turkish, Korean, and French. He was a consultant for the Dreamworks film “The Prince of Egypt,” for Alice Hoffman’s The Dovekeepers, and for NBC, A&E, PBS, and Nova.